The language that I missed

There are coincidences that need to be seized. After a night in the truly multilingual border town of Gorizia / Gurize / Gorica / Görz (four official names!) without any noteworthy event, I’m about to leave the place but can’t find the right exit to the backroads of Slovenia.

I trundle along a sidewalk – something you seem to be allowed to do here even in front of policemen’s eyes – and am suddenly accosted by a lady with a bike. Where am I going? Where have I come from? And why am I leaving now that she’s found me? She’s extremely interested in travellers, especially those on unmotorised two-wheelers. Io sono tanto aperta, she proclaims and invites me to pranzo, to lunch. It’s about ten, and I wanted to have an early start, considering the heat that’s threatening. But sometimes things come your way that pulverise all your plans.

So I hang around until Marina has completed her errands and then find her flat easily thanks to her description, which involves carrying the bike down some stairs through a park (how’s that for a Common European Framework descriptor of competence?)

The first impression of her place is that of a shop full of trinkets, plates, photos and piles of magazines, newspaper cuttings and books. In the two hours it takes for the lady of the house to prepare a spot of lunch, she gradually clears away the stuff on the dining table, one plate or bowl or flower vase at a time. Every so often she disappears and flushes the toilet, perhaps to get rid of some sewage smell I can’t perceive. At the same time she keeps talking to me in clearly enunciated Italian. But her life is so rich with anecdotes, children and encounters with travellers she has invited in, that I need to concentrate hard, at the same time a little worried if that lunch will ever materialise.

Marina is a retired elementary school teacher, who married a teacher when she was young, and the couple worked in small mountain schools for years as well as in Cormons. In both cases, Marina taught mainly Italian, the subject she insists is the most important. However, to communicate with the parents and live a social life in the paese, she and her husband learnt Friulan, and she proudly points out her diploma, issued by the Societât Filologjeche Furlane. The course she took, says the text, is testimony of il so interés e il so amôr pal jessi di cheste tiare.

No wonder her family is multiplexly multilingual: Her husband, who died ten years ago, spoke seven languages (Marina generously includes Latin – but he did once communicate in this seemingly dead language with a man he had no other tongue in common with) and her eldest son, to give just one other example, is married to a Hungarian woman and they live in London after a stint in Budapest. Italian, German, Hungarian, English, what a combination.

Marina, who is in her mid-sixties, now does mostly charity work, for Misericordia and various schools. For lunch, she has regular visitors from the town who, she says, have trouble getting by. She jokes and quarrels (or jokingly quarrels) with the white-bearded Paulo, whose hands are shaking as he pours the wine (and pours again and again till the bottle is gone). There are quick repartees in dialect which I can’t follow (again the nasals, the strange tch sounds, but it isn’t Friulan).

To me she tells of her love for her old bike, a venerable Bianchi, which takes her out everyday shopping and on tours through the floodplains of the surroundings (she does an average of 20 km/h, she claims, and I believe her despite [or rather, because of] the trouble she has climbing the stairs to her flat).

And she also mentions the language the villagers used when she was teaching at 1,700 m above sea level in a small place near Belluno: Fodóm (if I caught her correctly). Now this is a language I haven’t heard about, and it doesn’t figure on my planned route. Rather than a disappointment or a nuisance, this ‘missed language’ is actually a great opportunity for me: first, I will have something to investigate the next time I’m on the Internet, and second, it will cure me of any attempt for completeness or setting strange kinds of records. 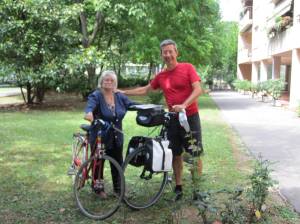 Having wined and dined me, Marina sends me on my blessed way

Du liest momentan The language that I missed auf 80languages.