Take one language, make three or more out of it …

I admit I haven’t written much about languages or experiences I had talking to people in recent entries. Have I given up on my topic? Has the heat and strain made me speechless? Well, not quite. There are some harder-to-describe reasons.

I’ve always had three key words in mind for this trip: Sprache, Landschaft, Glück (language, landscape, happiness). I had true hours of bliss when I cycled along the backbone of the island of Hvar, too true to be saying a lot about it. Here’s just one photo, but it won’t render what I experienced. It was one of the very best days of this trip. Incredible landscapes, making me nearly speechless. 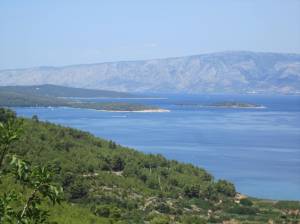 Another reason for my silence on the topic of languages is that I really didn’t talk to many people – I felt loath to brag about my expedition to regular tourists, who would normally react with mouths agape and take me for having gone round the bend in more than one sense. And since I never once managed to get a discount at a hotel, I’ve given up mentioning it to receptionists or landladies too.

But the real point is this: I don’t understand the regional language here, and I’m not even sure what I should make of it, or them. For we’re dealing with what we might call a language cluster, reaching from Gorica, where I first entered the zone, to beyond Mostar, where I’m staying now. “Western South Slavic” languages comes close to a neutral term, but the corresponding Wikipedia articles are far from clear and all need citations or attention from specialists, proof that there is lots of debate. Here’s a short specimen from the article about Slovene:

Alongside Croatian and Serbian, Slovene is an Indo-European language belonging to the Western subgroup of the South Slavic branch of the Slavic languages. It is close to the Kajkavian and Čakavian dialects of Croatian, but is further from the Štokavian dialect, the basis for the Bosnian, Croatian, Montenegrin and Serbian standard language. While Slovene is almost completely intellegible with Kajkavian Croatian dialects (especially the variant spoken in Hrvatsko Zagorje on the border with Slovenia), mutual intelligibility with other variants of Serbo-Croatian is hindered by differences in vocabulary, grammar and pronunciation.

And here’s another quote from the entry on Bosnian, or Bosniak:

Bosnian (Bosanski [bɔ̌sanski], Cyrillic: босански) is a name commonly used for Serbo-Croatian as spoken by Bosniaks. As a standardized form of the Shtokavian dialect, it is the official language of Bosnia and Herzegovina. The same subdialect of Shtokavian is also the basis of standard Croatian, Serbian, and Montenegrin, so all are mutually intelligible. Up until the dissolution of former SFR Yugoslavia, they were treated as a unitary Serbo-Croatian language, and that term is still used to refer to the common base (vocabulary, grammar and syntax) of what are today officially four national standards.

Nada, the Slovene woman I met in the Croatian back country, manages to get by perfectly on her travels, adapting her Slovenian on the basis of one school year’s worth of Serbo-Croatian. The fact that her presence here is not always well liked is another story and has to do with recent history, the war and the ease with which Slovenia got out of the mess and into the EU. That can provoke resentments, as she tells me.

Very near the border between Croatia and Bosnia & Herzegovina, I talked to a man who was still upset about the bombardment of Metkovic by the Serbs, but he was also riled by the Bosnians and their neglectful slovenliness (some of them were on the other side of the street at this moment, selling perfectly good-looking water melons and peaches). He referred to them as Turks and for a moment seemed to admit that Islam had been forced on them. But, he said, they speak the same language, just a few words being different. And they themselves are so different.

I heard the same story today talking to the lovely Elma, a young Bosnian Muslim woman selling tickets for a War Photo exhibition right beside the Mostar bridge. It’s the same language, she said, with a few words that differ, such as the one for bread, where Bosnians would say hljeb, Croats prefer kruh. She was born shortly before the war and remembers a few scary things from it, for instance the night when she was sleeping in the living-room with her sister for no obvious reason. That very night a shell struck the flat below theirs and damaged her bedroom. One of her uncles was killed in the war, as were the fathers of some of her friends. Despite the outward look of recovery along the narrow cobble-stoned streets of Old Mostar, she says there is still an invisible war going on. For instance, the educational systems for Bosnian and Croat children in this country are separate up until university. She is about to complete her studies in art, and at university at least, she made some Croat friends. She goes to the beach on the Croatian coast on some weekends, and there meets up with half her town. Bosnia & Herzegovina was only given a small slice of coast in the Dayton treaty, not even good enough for a sea port.

There seems to be fierce competition in this town for the tourist euro, and a second look will tell you exactly which ethnicity a business belongs to. It seems clear who is on the winning side, but as a good Swiss, I stay neutral, sleep in what seems to be a Bosnian-Muslim family pension and eat at a Croatian-style restaurant. But I would prefer not to have to make such choices all the time. And is it really adequate for a 24-year old intelligent woman to sit behind the counter of a permanent war photo exhibition that hardly any of the tourists want to visit? 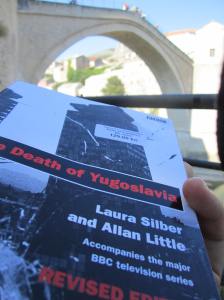 My reading and the reconstructed Stari Most (old bridge) of Mostar

The real reason why I haven’t said much about the issue here is that it is so intractable. I felt I needed to read up on recent Balkans history and am now engrossed in the details of Laura Silber and Allan Little’s book on the Death of Yugoslavia. Although I remember following events through regular newspaper reading, it’s still an eye-opener. Much of it would feel unreal, the atavistic world of men with uncontrolled fire power, if it wasn’t for the ruins of Mostar and the metal gate beside my Pansion, where the rims of the bullet and shrapnel holes have become so rusty that they are crumbling.

My reading is time-consuming and certainly doesn’t spell bliss. And that’s another reason why I’ve been rather quiet recently.

Du liest momentan Take one language, make three or more out of it … auf 80languages.