Good, slow fun – and then nearly a nightmare

This was James Richardson’s, the studio director’s, exhortation when the actors were going at too fast a clip during the recordings for our English language learning materials: Let’s make this good slow fun. Yesterday began like this for me, starting out from the hillside village Arbus. The narrow road rose even further up over a pass, but I didn’t mind as there was hardly any traffic, no trucks at least, and the scenery was beautiful and hardly touched. The coast behind these small mountains is inaccessible by road. I could have gone from Gúspini straight to Cagliari in a mere 65 km, but this detour was necessary because I wanted to visit a remote Phoenician-Roman temple, the Tempio Antas, and for this I accepted a thousand extra metres of ascent – up to the pass and down to the old mining village of Fiuminimaggiore, and then up again through a narrow winding valley. The weather was okay, the asphalt up to the temple was good, and I reckoned I’d be able to count Latin in as another language area traversed even though it is no longer alive. Obviously, it needn’t have been this specific site; I must have cycled a thousand miles through the former Roman empire, Hadrian’s wall to Constantinople to just consider the North-South dimension. But as I was struggling my slow way up to Antas, I calculated that I must have spent one thousand hours learning Latin to almost perfection (I did very well for marks in Gymnasium, but of course I never could speak a word of it). A thousand hours spent in the classroom and over homework would just about match the 1000 metres of altitude I covered in memory of my attempts, all forgotten now (but still beneficial for all sorts of snippets of Romance languages).

The temple was gorgeous for a number of reasons, the best being that it belonged entirely to me, myself and I for half an hour. Its history would deserve another blog entry, but let’s just note that the Latin inscription does not contain the appellation to DE SARDI PATRIS BAB in vain. Already the Phoenicians had respected the ancient Sardinian’s right to worship their father god (or had they even brought him along, to give the locals focus for their spiritual energies?) and the Romans fused the cult in with their own ritual sacrifices nicely.

Anyway, I decided on the basis of my old map (1990) and the ticket vendor’s affirmation that it was possible to take a shortcut and reach the main road to Iglesias on a gravel road. The map exaggerated the quality of this track vastly, and from a decent dirt road it turned into a rocky washed-out rut, and then I must have lost my bearings, so I ended up pushing and lifting the bike with the bags up and down a shepherds’ path with rocks the size of a baby’s head. I knew exactly I mustn’t fall; not a human soul in sight and no mobile phone reception would have meant something I didn’t want to think about too much. Thankfully, the goats and sheep around there were roaming without guard dogs which might have disliked my impertinent presence. Well, I didn’t really WANT to be there, either. 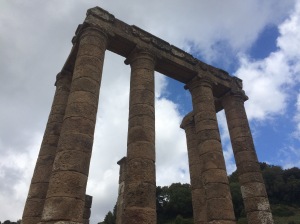 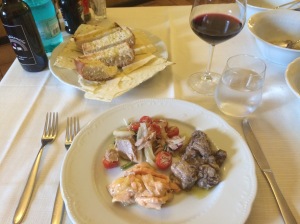 This was the boon at the end of a long day

Spotting the first bit of macadam behind a small hamlet was a huge relief, and checking on Google Earth this morning, I realized I hadn’t even got properly lost. It was just the kind of country where no one wants to build any road. In Iglesias, however, I was still nearly 60 km from Cagliari, and it was 3:30 pm. Without my trusty friend, the strong tailwind, I would never have made it in less than three hours. I did get lost in the end, though, I took a wrong turn and landed on a four-lane motorway into the Sardinian Capitale. No matter, it was fast, and now I get a day of rest in a B&B called My Home. What more does one want?